Timothy John is a singer/songwriter based in Los Angeles, CA who fuses the sounds of today’s popular Indie artists with the roots of Blues and Soul music. He writes with the intent to bring about honest lyrical content and dynamic melodies all wrapped together with expressive guitar playing. His Debut EP, “Stubborn”, is a testament to that, ranging from a wide atmospheric soundscape about lovers and the way their souls find each other, to a gritty acoustic blues tune about jealousy that will bring you back to the growing pains of your first love. Hearing Timothy John’s music offers a unique look into the heart of a musician who lives out every ounce of the lyrics that he writes.

Timothy John astonished us on Submithub with “Intertwined”, so we asked him some questions.

My all-time favorite song is definitely “Landslide” by Fleetwood Mac. That song is very personal to me because I grew up listening to it, and I feel like it captures what it looks like to walk the ups and downs of life. I really gravitate toward honest songwriting, and to me, that’s as honest as it gets.

I absolutely love to drive with “Midnight in Harlem” by Tedeschi Trucks Band blasting. There’s a sense of wandering in that song that just mesmerizes me when I drive and it makes long trips a lot more bearable. And it doesn’t hurt that Derek Trucks is one of my all-time favorite guitar players.

To be honest, I don’t listen to music that often when I clean but if a song were to come to mind it’d probably be “Oh Momma” by Justin Nozuka. My mom has been cleaning up after me and taking care of me my whole life and I feel like that song really captures the appreciation of a son to his mother.

“Put Your Records On” by Corinne Bailey Rae immediately comes to mind when I think of a song to wake up with. That song has such an optimistic melody that it really brightens up my morning if I’m lacking the will to face the day.

I don’t know of many musicians from Edison, New Jersey where I was born and raised. But, I’ve been living in the Los Angeles, CA area for a while and one of my favorite bands from here is Run River North. They’re really special because they’re a group of Asian-American musicians that makes really good, honest music.

Immediately when I think of an underrated artist, I think of Matt Corby. He’s one of my favorite musicians and has influenced my songwriting greatly, but I think he greatly lacks the recognition he deserves. I might offend some people but if I’m going to be completely honest, I think an overrated artist is Twenty One Pilots. As I said earlier I really gravitate toward honest songwriting and for some reason I don’t really get that with them.

If I could be one artist for just ONE day I’d probably choose Justin Bieber just because I don’t think I’d ever want to be that crazy famous. I don’t think I could handle being as famous as he is but I think it’d be fun for one day.

What’s the best song to listen to with your significant other?

The song that comes to mind when I’m with my girlfriend is “Open” by Rhye. It has a somewhat haunting melody that really captures intimacy.

I’m all about lyrics when it comes to songwriting so I don’t think I could quantify the most beautiful lyric I’ve ever heard. But a recent lyric that I heard that I thought was absolutely beautiful was “I have never known peace Like the damp grass that yields to me”. Which is a lyric in a song by Hozier called “In a Week”

I would absolutely love to play a concert at the Royal Albert Hall. It’s housed many of the greatest blues musicians since the 1950s so it has a rich history of the style of music that I love so dearly. 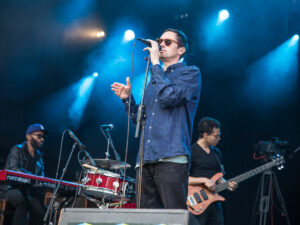 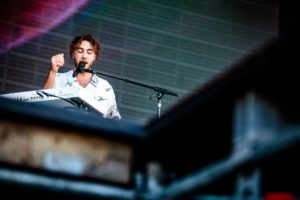