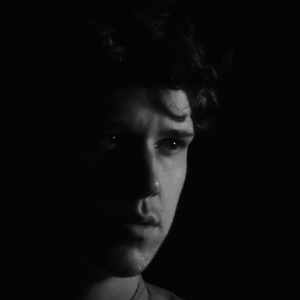 The Englishman Aaron Molyneaux has been writing and recording music for several years now. He does everything by himself in his basement studio. He started making music after taking a course in school, to do with using computers for recording music. His songs contain personal and honest lyrics, often about longing for love. The songs are direct, melancholic and sometimes even haunting. They feature his voice backed by a mostly electronic soundtrack. Every song is a true gem on it’s own. Molyneaux takes inspiration from Peter Gabriel among others, which you can hear best in his recent works. Last month he released his debut album “Blue” on Soundcloud and now there is a new single “Burning Youth”.

This new one is again about longing for a person, while being young and unable to cope with it. The desperation of the lyrics and vocals is reinforced by a haunting background sound at the 2-minute mark, and by the repetitive chanting of ‘I’m burning’ at the end. Another piece of remarkable music to add to his catalogue. And there is probably and hopefully more to come.

With the new single released, we thought it was about time to get to know him a little bit better. So we asked him about his favourite songs.

What is your all-time favourite song and why?
“Red Rain” by Peter Gabriel. It gives me goosebumps whenever I hear it. The power and emotion of his voice in this song just blow me away. The drums are huge, and there’s reverb on everything, it’s an 80s cliche. But it works so brilliantly!

What song is perfect for a Road Trip Song and why?
“Jenny Was A Friend Of Mine” by The Killers. The Killers I’ve noticed are really good for driving, I think it’s because of the power of the drummer in their music. But yeah I play them a lot in the car I think.

On which song do you like to clean?
When I do clean, probably some ambient music, maybe Brian Eno “An Ending”.

What’s the perfect song to wake up with?
“All Night Long” by Lionel Richie

Which artist do you think is to underrated and which one is overrated?
Underrated: I discovered a talent named Pixx recently a.k.a. Hannah Rodgers. I can see her becoming big.

If you could be one artist for a day, who would that be? And why?
Chris Martin of Coldplay. The dude is in great shape, and always looks like he’s having the time of his life on stage. And to be able to sit down in front of a crowd and play the piano intro to “Clocks” would be sublime.

At which place would you love to play a concert?
Royal Albert Hall

What’s the best song to make love to? (or to ask someone out?)
Any Bryan Ferry song.

What’s the most beautiful lyric you’ve ever heard?
I would choose the whole song but “Secret World” by Peter Gabriel features this lyric:
“I stood in this sunsheltered place
‘Til I could see the face behind the face
All that had gone before had left no trace.”