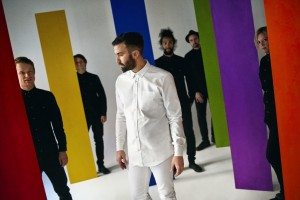 2016 is off to a good start for Norwegian band Lovespeake. Their debut single “DNA” gained a lot of attention when it was released. One reason is that lead singer Alexander Pavelich previously fronted the Norwegian popular band from which Lovespeake arose: Eye Emma Jedi. But the more important reason is simply their music. They sound like poprock from the  70s and 80s, and with a groovy feel to it. Perfect for some dancing. Think of a sound halfway Earth, Wind & Fire and Toto! Their new single “Tightrope” continues the groovy pop vibe. You can call it even ‘discopop’ with that funky bass and uplifting melodies. You will repeat the lyrics, to yourself or out loud: “Take me higher! I’m on fire!”

We love the Lovespeake sound, so we decided to interview them. They were so friendly to respond. Here are Alex Pavelich’s answers:

What is your all-time favorite song and why?

This cannot be answered, haha! The british prog rock band Yes have a classic album called “Close To The Edge” – The whole album is pretty much like one massive song, so it has to count!

Which song is perfect for a Road Trip and why?

Break Away – Euroboys. It’s one of my favorite songs to blast out on the road in the summer.

To which song do you like to clean? And Why?

Gettin’ Jiggy Wit it – Will Smith, it always makes me wanna dance and cleaning goes much faster!

What’s the perfect song to wake up with? And Why?

A Walk – Tycho. The intro is the chillest alarm clock ever! Beautiful track.

What’s your favorite artist from your home city? What’s so special about them?

An artist from Oslo that I really like is Coucheron. He’s a crazy, skilled producer & musician that I respect and also have a lot of fun writing & working with!

Mutemath are underrated. They are so talented and should be more recognized for their work. I don’t like to put artists in a bad light, but I suppose if I had to choose, maybe Lana del Rey is slightly overrated!

If you could be one artist for a day, who would that be? And why?

I would love to be Paul McCartney for a day so I could just sit on a beach in the Maldives and think back on the whole life he must’ve lived. The music he wrote, the places he played, the people he met.

I mean he pretty much invented the foundation for all pop music. Imagine being that guy for a day! Or Max Martin. Are you kidding me? Imagine BEING Max Martin!

What’s the best song to make love to? (Or to ask someone out?) Did you already use it?

Well, I guess the choice of song depends on the kind of “love” you’re making, haha! Personally I think music in the bedroom act is a bit distracting and.. cheesy. So I don’t have a good answer for that…

At which place would you love to play a concert? Why that place?

I’d love to play Glastonbury’s Pyramid stage. It just seems like the ultimate thing you can ever do as a musician.

What’s the most beautiful lyric you’ve ever heard? What’s so pretty about it?

“Love is watching someone die” from ‘What Sarah Said’ by Death Cab For Cutie. It’s not that it’s pretty, but it’s just so true and beautiful, in a sad way. Love is the ultimate thing to share with someone. It’s hanging in there with your mother, father, family, wife or husband ‘til the end. Ultimately it is watching someone pass away, something we all dread and store in the back of our minds and never think will happen. Love for another human being, whether its family or friends, is the greatest, single most unique, important irreplaceable thing in the universe. So to hang on to that until you die, is the most beautiful thing ever.